With Anthony Hopkins and Toby Jones facing off for the title of best Alfred Hitchcock impression in new biopics, we take a look at the rare examples of actors playing real-life directors. 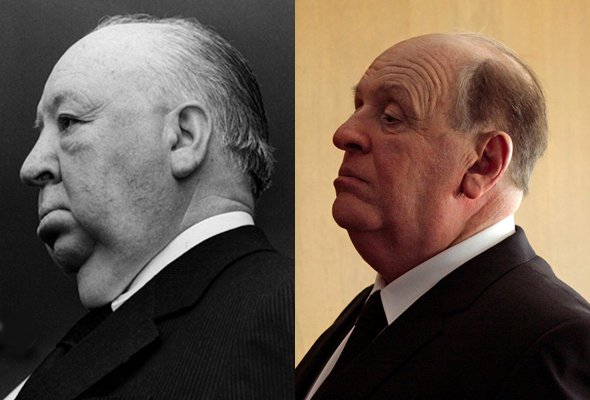 Alfred Hitchcock, as played by Anthony Hopkins in Hitchcock (2012)

Anthony Hopkins’s feature-length impression of the Master of Suspense in Sacha Gervasi’s new film Hitchcock follows hot on the heels of Toby Jones’s outing as the portly director in the recent TV film The Girl. It’s safe to say that film directors – those dominating creatives behind the camera – have recently become an onscreen subject unto themselves.

With the medium of film now well into its second century, its history and legends are now tempting terrain for film drama. Of course, the ‘write-what-you-know’ maxim has lead screenwriters and directors to make films about their own industry since the silent era, producing many classic films about filmmaking from Singin’ in the Rain (1952) via Federico Fellini’s 8 ½ (1963) to Mulholland Dr. (2001).

But the director characters in such films are nearly always fictional or, if modelled loosely on real figures, given fictional names. Think of Clint Eastwood’s turn as a very John Huston-like ‘John Wilson’ in White Hunter Black Heart (1990), or Marcello Mastroianni’s turn as harried auteur Guido Anselmi in 8 ½, a fictive surrogate for Fellini himself.

In the old days, if a real-life filmmaker turned up as a character in a film, why not get the actual director to play himself – as Cecil B. DeMille did in Sunset Blvd. (1950) or Fritz Lang did in Le Mépris (1963)?

Films in which actors portray real filmmakers are thin on the ground, but are slowly reaching critical mass. Hitchcock, who’s due for another outing next year in a film of actor Grace Kelly’s life, and Orson Welles, that great raconteur and showman, are two of the most natural subjects for films about film directors, which explains why they’re leading the pack in onscreen portrayals to date.

But with a young Jean Renoir (played by Vincent Rottiers) popping up in a recent French biopic about his painter father, Renoir (2012), doppelgängers of Luis Buñuel appearing in two releases in the last few years, and the recent emergence of a mini-genre of movies about troubled film shoots (from Shadow of a Vampire to Gervasi’s Hitchcock), a rogue’s gallery of film director impersonations has begun to take shape… 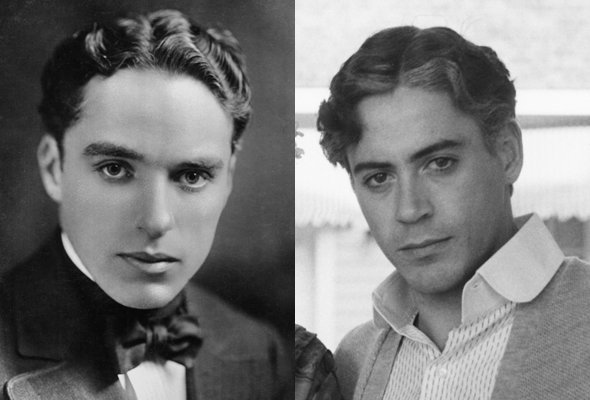 Charlie Chaplin, as played by Robert Downey Jr in Chaplin (1992)

Anyone with a fake moustache and a bowler hat has a fair chance of resembling Charlie Chaplin’s hapless Tramp character, long a staple of fancy-dress parties. But, as this side by side comparison shows, Robert Downey Jr proved an excellent likeness for the great director-comedian in his civvies too.

Told in flashback, Richard Attenborough’s 1992 biopic charted Chaplin’s rise from a childhood of poverty, via an apprenticeship on the London stage, to his career in early Hollywood and extraordinary worldwide fame. Making an impressive job of imitating the silent comedian’s balletic pratfalls, Downey Jr received an Oscar nomination for Best Actor for his portrayal. 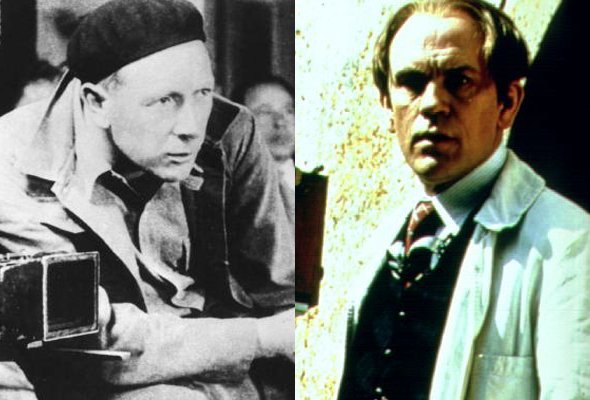 F.W. Murnau, as played by John Malkovich in Shadow of the Vampire (2000)

Though his career was cut tragically short when he died in a car crash just prior to the premiere of his South Pacific romance Tabu (1931), F.W. Murnau was one of the great directors of the silent cinema. A key figure in the shadowy, expressionistic German cinema of the 1920s, he was lured to Hollywood in 1927 for the mega-production Sunrise, considered a cinematic milestone for its poetic use of lighting and roaming camera movement.

The 2000 film Shadow of a Vampire is a fictionalised account of the making of Murnau’s eerie horror film Nosferatu (1922), a copyright-bypassing adaptation of Bram Stoker’s Dracula. John Malkovich plays Murnau as a flamboyant eccentric who’ll stop at nothing for his craft, going so far as to employ a real-life vampire to play the eerie Count Orlok. 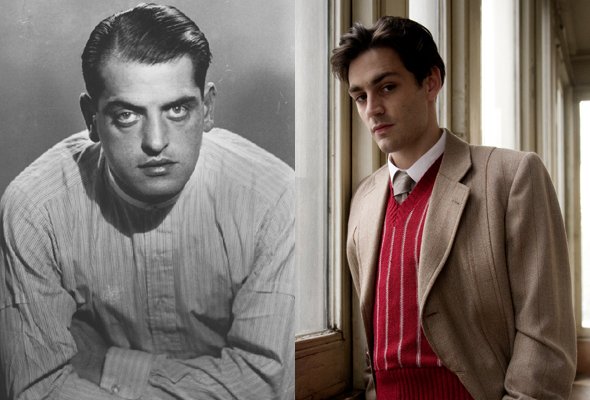 Luis Buñuel, as played by Matthew McNulty in Little Ashes (2008)

Canonised artists and writers are much more likely to get their own biopics than film directors, and in Paul Morrison’s drama Little Ashes, set amid the avant-garde scene in Madrid in the 1920s, aspiring filmmaker Luis Buñuel (Matthew McNulty) plays third fiddle to the homoerotic relationship between his friends Salvador Dalí (Robert Pattinson) and Federico García Lorca (Javier Baltrán). Feeling isolated as the pair grows closer, Buñuel leaves for Paris, where he would eventually launch his film career with the surrealist scandals of Un chien andalou (1929) and L’Age d’or (1930).

Portrayed in Morrison’s film as a priggish homophobe, Buñuel fared only marginally better in Woody Allen’s nostalgic comedy Midnight in Paris (2011), when the director (played by Adrien de Van, a better likeness) is shown to have got one of his best ideas – the plot for his 1962 Mexican film The Exterminating Angel – from a time-travelling Owen Wilson. 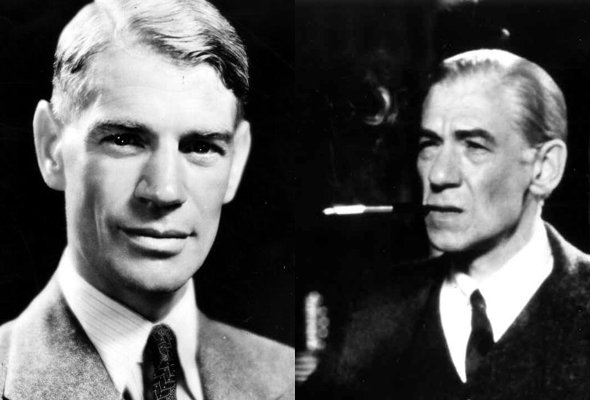 James Whale, as played by Ian McKellen in Gods and Monsters (1998)

Bringing the shadowy, exaggerated style of German silent horror films such as The Golem (1920) and The Cabinet of Dr. Caligari (1920) to Hollywood, British-born James Whale directed a hugely influential run of chillers for Universal during the early 1930s. Frankenstein (1931) and its 1935 sequel Bride of Frankenstein, The Old Dark House (1932) and his H.G. Wells adaptation The Invisible Man (1933) are some of the wittiest, most imaginative horror films the genre has given us.

Based on a fictionalised novel about the openly gay director’s relationship with his male gardener, the 1998 film Gods and Monsters dramatises Whale’s life in its final turn, when a series of strokes had left him fragile and tormented by the past. Bringing the silver-haired helmer a mischievous, camp sparkle, Ian McKellen was nominated for an Oscar for Best Actor for his performance. Further down the cast list, Martin Ferrero appeared as George Cukor, another great director of Hollywood’s Golden Age. 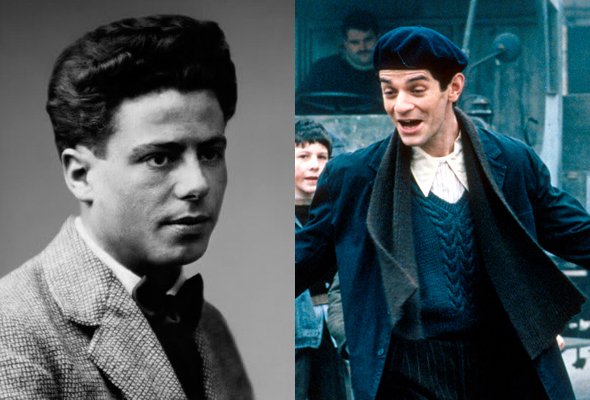 Jean Vigo, as played by James Frain in Vigo: A Passion for Life (1998)

Director Julien Temple has always been drawn to the subject matter of impassioned, often doomed creatives, whether punk rock stars (The Filth and the Fury, 2000) or Romantic poets (Pandaemonium, 2000). With 1998’s Vigo: A Passion for Life, he turned to a film director and one of the tragic short lives in cinema. Paris-born, Jean Vigo died from tuberculosis aged 29 leaving behind just three short films and a landmark feature, L’Atalante (1934), that still features on critics’ lists of the best films ever made. Its fusion of open-air naturalism with surreal poetry was a key influence on later filmmakers, including those of the French New Wave.

Temple cast James Frain, since known for TV’s The Tudors, as the troubled young filmmaker, giving him an authentic Vigo coiffure and having him dive into the Seine to experience an underwater apparition just as the young lover does in L’Atalante. 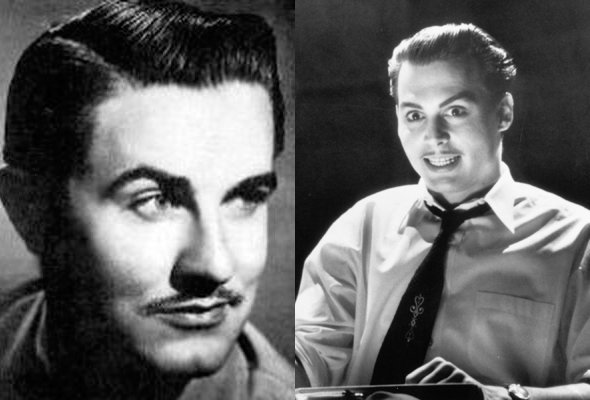 It’s ironic that the director sometimes called the worst ever should provide the subject of one of the most satisfying filmmaker biopics. Edward D. Wood Jr was the irrepressible director of some of the tawdriest Z-grade science-fiction and horror films of the 1950s, a director who never let his tiny budgets get in the way of pursuing his vision. Films such as Bride of the Monster (1955) and Plan 9 from Outer Space (1959) are littered with cardboard spaceships, rubber monster suits, and incongruous stock footage.

Lovingly recounting Wood’s life story in the down-at-heel margins of Hollywood, director Tim Burton cast Johnny Depp as the charismatic, cross-dressing auteur, and Depp relishes every second, whether donning one of Wood’s beloved angora sweaters or enrapt in a eureka moment of inspiration, eyes bright with enthusiasm above his pencil-thin moustache. 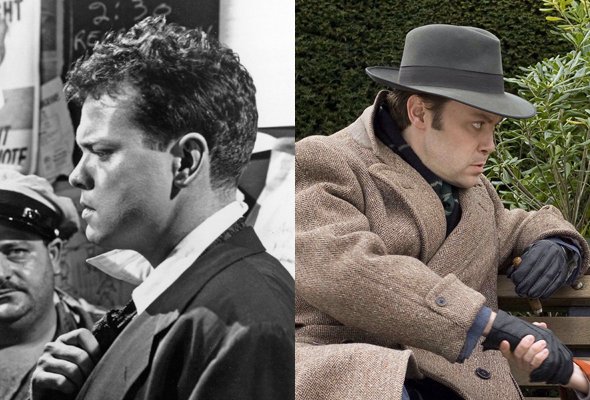 Orson Welles, as played by Christian McKay in Me and Orson Welles (2009)

“Visions are worth fighting for. Why spend your life making someone else’s dreams?” Such is the advice that Orson Welles (Vincent D’Onofrio) gives starstruck B-movie director Ed Wood in Tim Burton’s Wood biopic. It’s perhaps for his gift as a teller of tales, or as the larger-than-life archetype of the film director as exuberant artist, that Welles must be the most frequently impersonated filmmaker on screen.

Angus MacFadyen played the Welles of his 1930s days on the New York stage in Cradle Will Rock (1999); Liev Schreiber played him during the production of Citizen Kane (1941) in the TV movie RKO 281 (1999); Danny Huston played him in the aftermath of his doomed marriage to Rita Hayworth in Fade to Black (2006); and – pictured above – Christian McKay, certainly one of the best incarnations, played Welles at the time of his 1937 stage production of Julius Caesar in Richard Linklater’s Me and Orson Welles (2009). 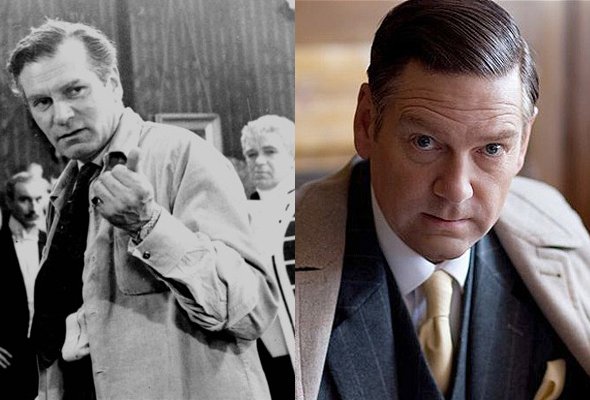 Laurence Olivier, as played by Kenneth Branagh in My Week with Marilyn (2011)

As the actor-director of highly acclaimed Shakespeare adaptations on both stage and screen, Kenneth Branagh has so often been compared to the great Laurence Olivier that it was perhaps inevitable that one day he’d end up playing him. Though Olivier is best known as a film director for his inventive Shakespearean trio of Henry V (1944), Hamlet (1948) and Richard III (1955), for Simon Curtis’s 2011 film My Week with Marilyn, Branagh plays Olivier during the production on his later, critically maligned The Prince and the Showgirl (1957).

Depicting the tempestuous relations between Olivier and his co-star, Marilyn Monroe (Michelle Williams), the film gives Branagh ample room for an expert, feature-length Olivier impression. As Peter Bradshaw noted in The Guardian: “It is a complete joy to see Branagh’s Olivier erupt in queeny frustration at Marilyn’s lateness, space-cadet vagueness, and preposterous Method acting indulgence. He sometimes appears to be channelling the older and more sinister Olivier of Marathon Man.” 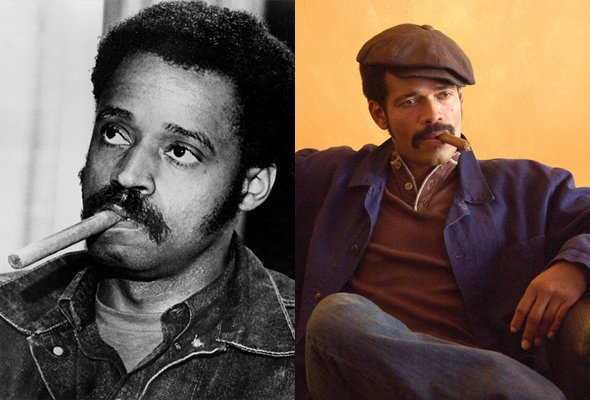 The popular success of Melvin Van Peebles’ renegade independent 1971 feature Sweet Sweetback’s Baadasssss Song, about a young African American man’s flight from police persecution in South Central Los Angeles, is credited with waking Hollywood up to a potentially lucrative young black audience. Blaxploitation films such as Shaft (1971) and Superfly (1972) followed in its wake.

But making a film of such revolutionary intent on the fringes of a conservative film industry had its challenges, and the movie’s troubled production history would later be dramatised by the director’s son Mario Van Peebles in his own film, Baadasssss (2004). In the small canon of films featuring actors playing real-life directors, Mario (portraying Melvin) perhaps has an unfair advantage in the physical resemblance stakes: with handlebar moustache and ever-present fat cigar, he’s a dead ringer for his groundbreaking father.