The Battles of Coronel and Falkland Islands 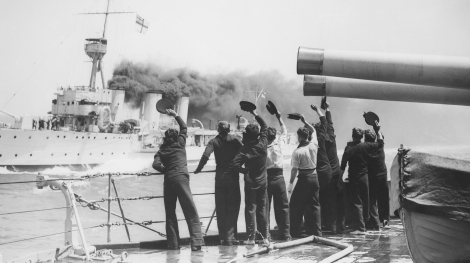 To commemorate the centenary of the outbreak of WWI, the BFI National Archive has restored one of the finest films of the British silent era – a thrilling reconstruction of two decisive naval battles from the early stages of the conflict. The Battle of Coronel, off the coast of Chile, was a triumph for German Admiral von Spee – the first defeat of the British navy for a hundred years. The retaliatory strike was instigated six weeks later by ace British tactician Admiral Fisher who sent two new battle cruisers, Invincible and Inflexible, to the South Atlantic to restore British supremacy. Summers’ film was originally released on Armistice Day to act as a memorial to the thousands who died. Filmed on real battleships supplied by the Admiralty, this monumental production was shot mostly at sea near Malta, with the Scilly Isles a convincing stand-in for the Falklands. It is an astonishingly effective piece of filmmaking, which glories, like Eisenstein’s Battleship Potemkin, in the power and beauty of the machine. Scrupulously fair in its treatment of the enemy, this stirring film is presented with a newly commissioned score composed by Simon Dobson and performed live by The Band of Her Majesty’s Royal Marines.