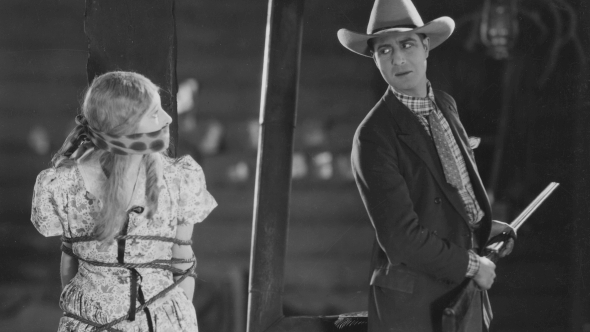 Shooting Stars opens in a British movie studio in the 1920s, where a western and a slapstick comedy are being filmed back to back. It’s a fascinating behind-the-scenes glimpse and a searing comment on the shallowness of the star system. Despite the director credit going to veteran filmmaker AV Bramble, this is demonstrably the original work of rising talent Anthony Asquith – his dynamic cinematographic style and professional approach to the design and lighting was a step change in the quality of British features. And there’s a killer ending too! Restored from material held at the BFI National Archive by our specialist team. It completes the BFI’s revival of Asquith’s silent film work, following on from A Cottage on Dartmoor and Underground. The new BFI-commissioned score for a hand-picked 12-piece ensemble (from the Live Film Orchestra) is by composer, conductor, arranger and saxophonist John Altman. - Bryony Dixon