Play On! Shakespeare in Silent Film 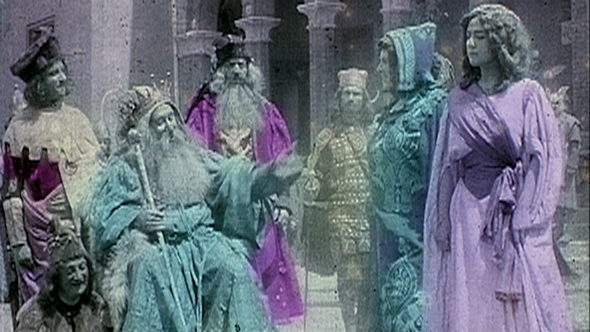 By the end of the silent era around 300 Shakespeare adaptations had been produced. This celebration from the BFI National Archive draws together a delightful selection of thrilling, iconic and humorous scenes from 24 titles (many unseen for decades), newly digitised and brought to life by the composers and musicians of Shakespeare’s Globe Theatre. See King Lear battle a raging storm at Stonehenge, The Merchant of Venice in stencil colour, the fairy magic of A Midsummer Night’s Dream and what was probably John Gielgud’s first appearance on film, in Romeo and Juliet (1924).

The film is suitable for everyone from school age to old age, and
requires no specialist knowledge of either silent film or Shakespeare.

The DCP comes with options to play the Globe score or to play silent for
live accompaniment, and includes an optional 10-minute short, Making the
Music, which is about the Globe’s creation of the score.