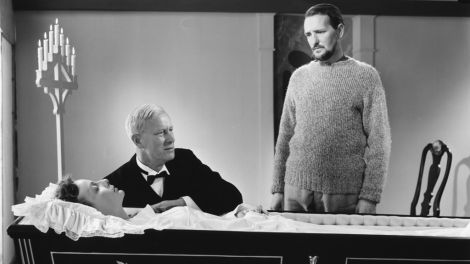 For many this adaptation of Kaj Munk's play about tensions within a Jutland farming family is the very greatest of all Dreyer's masterpieces, as suspenseful as it's emotionally devastating.

Old Morten Borgen fears God has abandoned him. Though he adores daughter-in-law Inger, he wishes she could restore her atheist husband Mikkel to the family's traditional beliefs; Anders his youngest wants to marry the daughter of a tailor who preaches a detestably puritanical Christianity; and his middle son Johannes now believes he's Jesus. How could things be worse? Far from the miserabilist litany this brief character summary might suggest, Dreyer's penultimate film is at once a wise, even witty exploration of pride, prejudice and pretensions to devout faith, and a heartrending hymn to the power of earthly passion and love. In contrast to the performances' intimate naturalism, the exquisite lighting, camera movements, sets and sounds all add to the sense of a super-reality, strangely familiar yet informed by mysterious forces of dark, almost primal emotion. Truly a towering achievement.