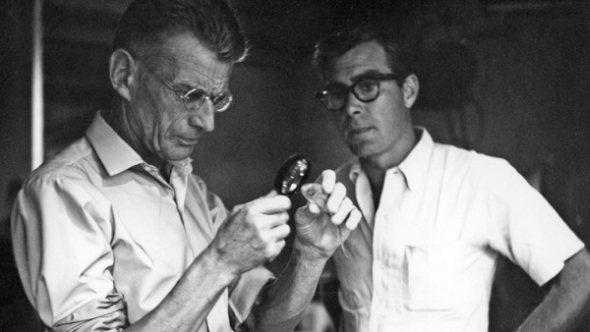 Was Buster Keaton Samuel Beckett’s doppelgänger? In this extensive kino-essay, Ross Lipman explores the literary, cinematic and personal history surrounding the production of Beckett’s only screenplay for cinema, the Buster Keaton starrer FILM (1965). Beckett himself considered the formal experiment of FILM a failure, while Keaton was mystified by the whole project. Lipman, by contrast, remains fascinated by it. Drawing upon his experience as a former Senior Film Restorationist at UCLA Film & Television Archive, Lipman ensures that NOTFILM is full of material that will excite even the most casual cinephile. His energetic, associative editing gives us clips from the work of Buñuel, Vertov, Vigo, Eisenstein and so many more as he explores Beckett’s ideas and their genesis. Including interviews with Haskell Wexler and Beckett’s friend Barney Rosset, a film producer and fearless publisher, this is clearly a passion project for Lipman and has been researched with curiosity and vigour. - Kate Taylor