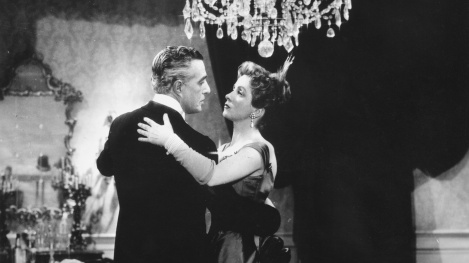 For many, this piercingly poignant fin-de-siècle romance, with its dark but exquisitely delicate sense of irony, is the very finest of what David Thomson has called Max Ophüls’ ‘amusing tragedies’. When, beset by debt, the titular Countess Louise (Danielle Darrieux) decides to sell a pair of earrings that were a wedding gift from her husband André (Charles Boyer), she unwittingly sets in motion a chain of events that will have serious consequences not only for the Parisian couple but for André’s mistress and for an Italian Baron (Vittorio De Sica) who purchases the by then much-travelled jewellery. This being an Ophüls film, the camera is likewise in constant motion, at once following the characters as a discreet but sympathetic observer and revealing how they are all constrained, even trapped by social convention, money and their own various deceits and desires. The lightly nuanced performances, the marvellously detailed sets and the elegant artifice of the plotting never distract from the fundamental seriousness of Ophüls’ searing study of fateful passion. A film of unassuming but enduring greatness. – Geoff Andrew