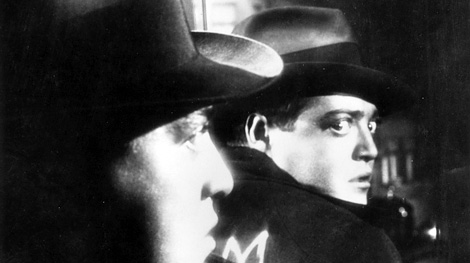 Made two years before Hitler came to power, Fritz Lang's first sound
film is a great psychological thriller, a trenchant treatise on crime
and justice, and a vivid portrait of the rapidly disintegrating Weimar
Republic.

Peter Lorre shot to stardom as the compulsive child
murderer who is hunted down not only bt a desparate, frustrated police
force, but - rather more ruthlessly - by Berlin's criminal underworld.
The extraordinarily detailed police procedures are based on Lang's research at the Alexanderplatz
police headquarters, while the documentary-style depiction of Berlin's
prostitutes, beggars and grotesquely respectable citizens recalls the
sharp-eyed satire of artists such as Grosz and Dix.  Lorre's first major
screen role was also his greatest - no monstrous caricature but a
quietly credible psychopath who could easily be your next-door
neighbour.  The explosive revelation of his inner torment is one of
cinema's great set-pieces.  Renonwned for its striking imagery and inventive use of sound, M
can now be enjoyed in a pin-sharp new restoration.  For once, such
words as 'seminal', 'unmissable' and 'masterpiece' are not just hype. - Margaret Deriaz

This new restoration of Fritz Lang's M is released by the BFI to mark the 50th anniversary of Peter Lorre's death.