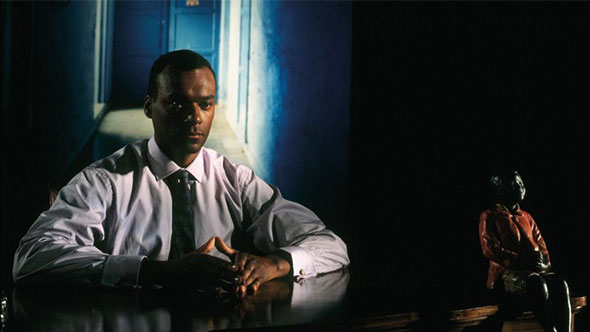 Frantz Fanon was an Afro-Caribbean psychiatrist, philosopher and revolutionary whose inspiring, ground-breaking writing of the 1950s and 1960s explored the psychopathology of colonisation. Subverting traditional documentary codes, artist Isaac Julien and Mark Nash here depict and unpack Fanon's life and ideas through a rich, compact interweave of lustrous Algerian locations, archival footage and interviews with family members and critical thinkers, including the much-missed Stuart Hall. Fanon wrote that racism was the absolute depersonalisation of the individual and the film examines the extension of this dynamic through the complexity and problematics of language; whilst pointed, unsual framing emphasises the chains of gazing and desire that exists in the Oedipal relationship that Fanon identified between master and slave. A rich, poetic, powerful work, this newly restored version, which makes its world premiere at the LFF, looks both punchy and resplendent. (William Fowler)