Around China with a Movie Camera 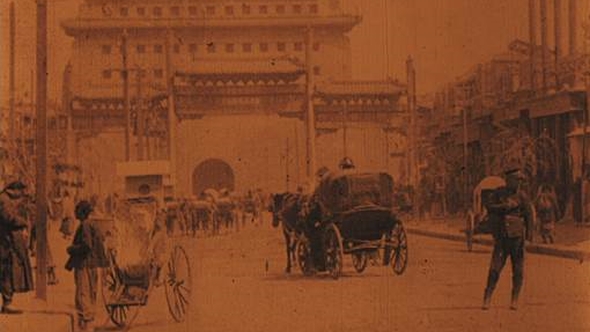 Take a trip back to China in the first half of the 20th  century with this programme of extraordinary, rare and beautiful travelogues, newsreels and home movies.

These films – all from the collection of the British Film Institute National Archive – were made by a wealth of British and French filmmakers, from professionals to intrepid tourists, colonial-era expatriates and Christian missionaries. Exploring 50 years of Chinese history across a diverse range of footage, the collection includes what might be the oldest surviving film to be shot in China – unseen for over 115 years.

See Shanghai’s bustling, cosmopolitan Nanjing Road in 1900, the Great World Amusement Park in 1929 and a day at the Shanghai races in 1937. Wander the streets around the Qianmen, Beijing, in 1910. Cruise Hangzhou's picturesque canals in 1925. Visit China's great cities including Hong Kong, Chongqing and Guangzhou and visit remote villages in Hunan and Yunnan provinces. - Edward Anderson, BFI Curator