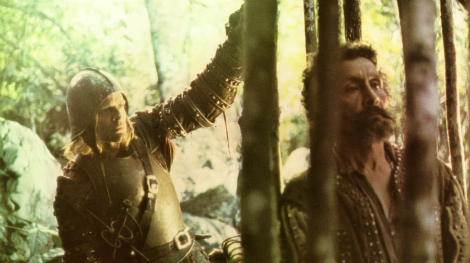 From its opening shots of an ant-like column of Spanish conquistadors and their enslaved indigenous porters scrambling perilously down through the clouds on a sheer pass in the Andes, it’s immediately clear that Werner Herzog’s account of the quest for El Dorado – now newly restored – will be something extraordinary.
As the pious but ruthlessly ambitious invaders pursue their fantasies of riches and power, they soon fall prey not only to the Amazonian forests, rivers and Indians but to their own ludicrous delusions of recreating European society in an indifferent, wholly alien landscape. Most extreme in this madness is Don Lope de Aguirre (Klaus Kinski), whose megalomaniac scheming proceeds from the mutinous to the murderous. At once a stirring but avowedly unsentimental tale of overweening ambition and a remarkably rich and original variation on the adventure film, Herzog’s masterpiece combines a flair for the epic with moments of incisive miniaturist observation. The images are breathtaking in their beauty, mystery and sense of scale; Kinski’s performance was arguably his best ever; and the sharp insights into human folly – sometimes sorrowful, sometimes darkly witty – typify Herzog at his most caustically effective. Quite magnificent. Geoff Andrew

The Enigma of Kaspar Hauser