A samurai drifts into a rural town divided between two gangs and proceeds to play one side off against the other, with events soon spiralling into violence. 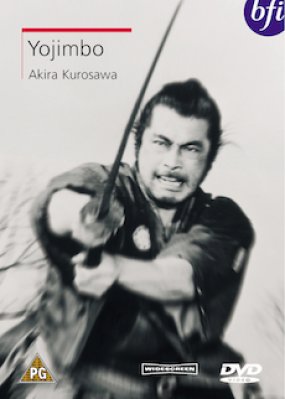 “I want three coffins… make that four” – Sanjuro, from Yojimbo.

Yojimbo is the story of Sanjuro, a samurai in nineteenth-century Japan who drifts into a rural town and learns from the innkeeper that the town is divided between two gangs. He proceeds to plays one side off against the other, but his activities are curtailed by the arrival of Unosuke, a shrewd and ruthless man – the son of one of the gangsters. Events spiral into violence and the samurai must chose a side…

This classic movie was remade as For a Fistful of Dollars, Last Man Standing, and John Avildsen’s Coyote Moon. It is paid homage to in films as varied as Star Wars, Raiders of the Lost Ark and Miller’s Crossing, is spoofed in Support Your Local Gunfighter and Mars Attacks!, and of course, had a sequel, Sanjuro, and a ‘spin-off’ in 1971 called Zatoichi to Yojimbo.

The ‘preachiness’ of some earlier Kurosawa movies is absent in this story of the mercenary Sanjuro played by Toshiro Mifune who, in typically mesmeric fashion, steals the film. The movie also features Eijir Tono as Gonji, the Sake Seller, Kamatari Fujiwara as Tazaemon and Takashi Shimura as Tokuemon.