Woman of the Dunes

Hiroshi Teshigahara’s fable Woman of the Dunes remains as mystifying, serene and provoking as when it was first released. 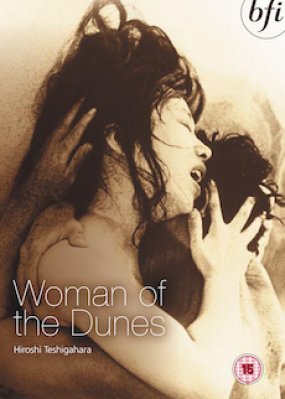 One of the great Japanese classics of the 60s, Hiroshi Teshigahara’s fable Woman of the Dunes (based on the novel by existentialist writer Kobo Abe), remains as mystifying, serene and provoking as when it was first released. This, the uncut version, has never been available in the UK before.

The story opens with Jumpei Nika (Eiji Tokada), a teacher who has been collecting insect specimens, who misses the last bus home. He is offered shelter by locals in a house at the bottom of a sandpit, the home of a young widow (Kyoko Kishida). The next morning he awakes to find that the rope-ladder, the only means of exit, has been removed, but he believes that it will reappear soon enough. He agrees to help the woman in her nightly labour of shovelling away the sand that threatens to bury them, and it slowly comes to him that not only is he a prisoner, but that he must shovel sand in order to survive. Although he becomes increasingly frantic, the oppressive confinement of their situation and the force of physical attraction inevitably leads them to become lovers. But like their environment, their relationship is unsustainable, as Jumpei becomes increasingly obsessed with freedom.

Out of this highly bizarre, if simple, situation, Teshigahara builds an atmospheric, highly charged and remarkably sensual exploration of the human condition. The visual impact and surreal imagery of the film is remarkable – the abstract patterns, the unconventional notions of scale and the detail of patterns and texture. The performances of the two leading players – who had to work under hot, sticky conditions, surrounded by the ever-present walls of sand – are equally striking. Kyoko Kishida, in particular, brings out the woman’s weird obsessiveness, becoming increasingly human as the story progresses.

Viewers are given plenty of opportunity to argue over what the allegory actually means – how a sense of freedom can be tempered by circumstances or how people can be forced to come to terms with a strange and unexpected environment, almost against their will.