Geoffrey Jones: The Rhythm of Film

With his extraordinary marriage of images, music and rhythm, Geoffrey Jones ranks alongside such luminaries as Norman McLaren and Len Lye, and remains one of Britain’s true film artists. 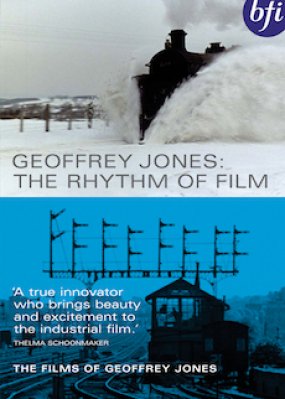 Since the 1950s, Geoffrey R Llewellyn Jones has been making multi-award-winning short films that look, sound and feel like nothing else. With his extraordinary marriage of images, music and rhythm, he ranks alongside such luminaries as Norman McLaren and Len Lye, and remains one of Britain’s true film artists.

Born in London in 1931, of Welsh parents, Geoffrey Jones trained at Central School of Art in interior design, graphic design and photography. Mesmerised by cinema since he was a child and later inspired by Dziga Vertov and Luciano Emmer, his first film project, a satire on the commuter society, envisaged images cut to very rhythmic music, a technique that became his hallmark. Although the film was never actually made, the drawings led to work, when he was just 24, as a one-man band – The Experimental Film and TV Department of advertising agency Crawford International, where early work included an acclaimed commercial for Martini. He went on to make films for global companies like Shell and BP, and innovative animated shorts.

Geoffrey Jones is best known as the director of three seminal films for British Transport Films; Snow (1963), which was nominated for an Oscar, Rail (1967) and Locomotion (1975), all shown at festivals around the world. In films such as Snow, where trains and railway workers battle against severe weather conditions, Rail, a commemoration of the steam age and celebration of the electric age, and the travelogue Trinidad & Tobago (1964), images react, combine and dance together to create a living, pulsing journey. In Locomotion, the entire history of the British railways is illustrated through a captivating and accelerating rhythm.

The Rhythm of Film brings a selection of Geoffrey Jones’ films together in one collection for the first time to show what makes his work so special. Most of his work was in the sometimes precarious area of industrial shorts, but his unique vision is also revealed in his more personal works such as the Seasons Project and the two Chair-a-plane films.