Out of the Unknown box set

The classic anthology science fiction series from 1965 is one of the most daring, ambitious and inventive series ever created. 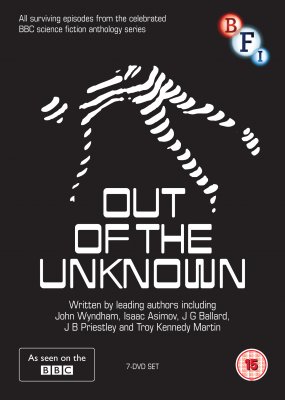 On 27 October 2014, as part of Sci-Fi: Days of Fear and Wonder, the BFI will release a comprehensive 7-disc DVD box set that brings together all 20 surviving episodes from the four original series, all digitally remastered from the best available materials.

Created by Irene Shubik (The Wednesday Play, Rumpole of the Bailey), Out of the Unknown employed the cream of British talent to bring a variety of often chilling, sometimes darkly comic, and always thought-provoking science fiction tales to the small screen. Dramatists such as J B Priestley and Leon Griffiths, directors such as Philip Saville and Rudolph Cartier, visionary designers such as Ridley Scott, and actors of the calibre of Yvonne Mitchell, George Cole, Milo O’Shea and David Hemmings were brought together to produce one of the most prestigious science fiction series ever made.

When plans to release this classic TV series for the very first time were originally announced, the BFI was inundated with letters and e-mails from private collectors and die-hard fans, all of whom generously offered their invaluable help. Collectively, they have ensured that the contents of this long-overdue release are as thorough and exciting as possible. The impressive range of extra features (produced by ‘professional fans’ in collaboration with the BFI) includes 4 episode reconstructions, an incomplete episode, 11 audio commentaries, extensive stills galleries, an interview with director James Cellan Jones, and a newly-created 42-minute documentary featuring interviews with original cast and crew members as well as rarely-seen clips from lost episodes.