Features some of the earliest surviving film of professional football, cricket and rugby as well as exploring amateur sport and leisure in Edwardian life. 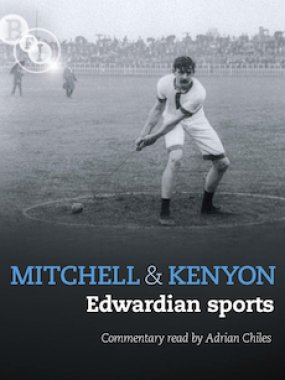 Over a century ago, filmmakers Sagar Mitchell and James Kenyon roamed the British Isles filming the everyday lives of people at work and play. For around 70 years, 800 rolls of this early nitrate film sat in sealed barrels in the basement of a shop in Blackburn. Miraculously discovered and painstakingly restored by the BFI, this now ranks as the most exciting film discovery of recent times.

Mitchell & Kenyon: Edwardian Sports offers an unparalleled opportunity to see and learn about sporting action at the turn of the century. A remarkable selection of sporting highlights from the Mitchell & Kenyon collection, it brings together some of the earliest surviving films (1901-7) featuring the titans of professional football, cricket and rugby whilst also rediscovering the Corinthian spirit of amateur sport and leisure in Edwardian life. Liverpool, Hull, Kingston Rovers, Everton, and Blackburn Rovers football teams are all featured, alongside a swimming gala in North Shields, the AAA championships of 1901 and the Mold cricket controversy – an early ‘chucking’ storm with an Australian umpire at its centre.

The DVD is programmed by Dr Vanessa Toulmin of the National Fairground Archive at the University of Sheffield Library, author of the BFI book Electric Edwardians: The Films of Mitchell & Kenyon (2006) and editor of The Lost World of Mitchell & Kenyon: Edwardian Britain on Film (BFI, 2004).