Two imaginative films by Patrick Keiller, documenting a journey by the unseen researcher Robinson and his companion, the narrator. 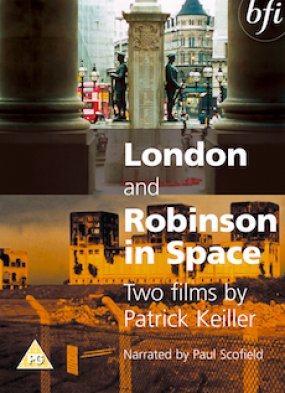 Patrick Keiller’s imaginative and highly original films each document a journey undertaken by the unseen ‘researcher’ Robinson and his similarly unseen companion, the film’s narrator (voice by Paul Scofield).

London is a journal of 1992, the year of John Major’s re-election, IRA bombs and the first crack in the House of Windsor. Scathing reflections on the recent past are enlivened by offbeat humour and wide-ranging literary anecdotes.

Robinson in Space sees Robinson commissioned to undertake a study of the ‘problem’ of England. Keiller’s immaculately framed images and sly deadpan narration take the viewer on an unpredictable exploration of the cultural and economic landscape.

“London is full of ideas and yet hugely entertaining.”
— Mike Hodges

“[London] is one of the most original British features in a long time.”
— Geoff Andrew, Time Out.

“Breathtaking images… [Robinson in Space] is an intellectually exciting movie that makes us think afresh about the world.”
— Philip French, The Observer.