Joyfully immoral satire set in a Flemish town in the 1600s. Facing invasion by the Spanish army, the town’s women set out to avert catastrophe. 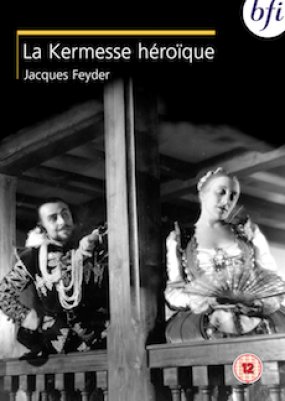 Jacques Feyder’s joyfully immoral satire, La Kermesse héroïque (Carnival in Flanders), was greeted with acclaim and controversy on its original release – acclaim at international film festivals where it scooped top prizes, and controversy in Belgium where it caused small riots: some protested about the mocking portrait of Flemish notables whilst others saw in it allusions to the Flemish collaborators during the Germans’ occupation of the area during World War I. Some even called it ‘Nazi-inspired’.

This tongue-in-cheek farce – an early feminist screen comedy – is set in the early 1600s in a Flemish town which is facing invasion by the Spanish army. The men of the town are spineless and the mayor pretends to be dead, but his rather more courageous and sophisticated wife (played by Feyder’s own wife Françoise Rosay) takes control of the situation and by recognising and appealing to the enemy’s base needs, she and the town’s women avert certain catastrophe.

Feyder succeeds in balancing witty farce and intimate character comedy in lush settings through which he aimed to bring to life the work of such Flemish masters as Vermeer, Hals, Memling and both Brueghels. Art Director Lazare Meerson’s recreations of the Flemish town, architecturally precise and scrupulously detailed, and beautiful photography by Harry Stradling combine to make an unforgettable impact.