Box set celebrating Akira Kurosawa’s mastery of the crime genre with four of his finest thrillers. 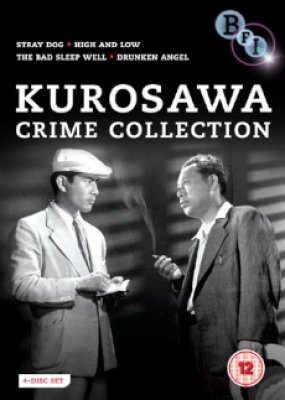 Akira Kurosawa, one of cinema’s greatest auteurs, has wowed audiences and inspired filmmakers as diverse as George Lucas and Sergio Leone. This four disc box set highlights his mastery of the crime genre bringing together four of his finest thrillers.

Toshiro Mifune, in his first major screen role, plays a small-time Yakuza who embarks on an uneasy friendship with an alcoholic slum doctor, played by Toho regular Takashi Shimura. Drunken Angel is part gangster, part melodrama and part social critique, and establishes the on-screen chemistry and dynamics of these two leading men that Kurosawa was to explore in further films.

A masterful mix of film noir and police thriller set on the sweltering mean streets of occupied Tokyo. Kurosawa favourites, Mifune and Shimura, are paired for the second time as a rookie detective and his senior in a desperate hunt for a shooter with the former’s stolen police pistol.

The first feature released under the aegis of Kurosawa’s own production company. The Bad Sleep Well is an impressive tale of corporate greed and corruption starring Mifune as a grieving son seeking revenge for his father’s ‘suicide’. It is a powerful indictment of the dark side of business and politics with distinct overtones of Hamlet.

Based on an Ed McBain novel, High and Low is a gripping police thriller in which a wealthy industrialist, Mifune, faces an agonising choice when a ruthless kidnapper, aiming to snatch his young son, takes the chauffeur’s boy by accident.