Kirikou and the Sorceress

Based on a traditional West African folk tale, this award-winning animated feature tells a story of innocence defeating evil, with a modern twist. 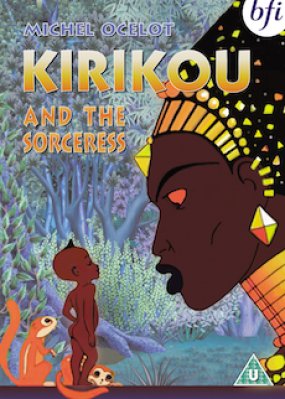 A huge hit in France and joint winner (along with Chicken Run) in 2002 of the British Animation Award for best European animated feature, Kirikou and the Sorceress is a children’s animated film that is a world away from Disney.

Based on a traditional West African folk tale, Kirikou and the Sorceress is the story of innocence defeating evil, with a modern twist. Glittering with gold and exuding malevolence, Karaba is a sorceress who has eaten the men-folk of the village and dried up the spring. No one seems able to stop her until a remarkable baby is born. The tiny but brave Kirikou delivers himself from his mother’s womb to emerge walking and talking and undertakes a perilous journey in order to disarm the sorceress by discovering the cause of her own pain.

Writer-director Michel Ocelot’s rich animation plunges his audience deep into the myth and spirituality of the African bush. The animation style and setting are unapologetically African with no attempts to westernise the people or setting. From emerald jungles to the glowing hellfire of Karaba’s lair, Kirikou’s world is a kaleidoscope of joyous colour. The drawings of plants and trees are stylised reproductions of real tropical flora, inspired by Egyptian drawings and the paintings of Henri Rousseau.

The soundtrack by internationally renowned Senegalese musician Youssou N’Dour gives an authentic pulse to what he calls the mythical Africa of children’s tales. Kirikou and the Sorceress, the only film to attract his talents, features only traditional African instruments. The music and voices were recorded in his Dakar studio.

The DVD features both the English language version and the original French version with optional subtitles, to aid children learning French.