All 26 of Jan Švankmajer’s short films, as remarkable for their philosophical consistency as for their frequently mind-boggling imagery. 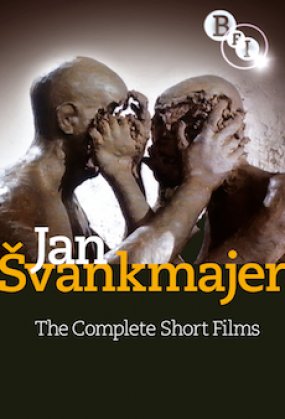 “The world is divided into two unequal camps: those who have never heard of Jan Švankmajer… and those who happen upon his work and know that they have come face to face with a genius.” Anthony Lane, The New Yorker.

Featuring all 26 entries in the official filmography, this is the world’s first complete DVD edition of the short films by the legendary Czech Surrealist filmmaker-animator Jan Švankmajer. Technically and conceptually astonishing in their own right, these films are also as remarkable for their philosophical consistency as for their frequently mind-boggling imagery.

This package also includes a bonus short, Johanes Doktor Faust (1958), the longer cut of ‘The Cabinet of Jan Švankmajer’ with a new introduction by the Quay Brothers, the documentary Les Chimeres des Švankmajer (2001), interviews with Jan and Eva Švankmajer and examples of their work in other media. There’s also a chance to see some Švankmajer special effects, created when he was banned from directing his own films. A 54-page illustrated booklet includes full credits and detailed notes on each film by leading Švankmajer experts.