This highly acclaimed series was adapted from Peter Dickinson’s best-selling trilogy and paved the way for the likes of Survivors and Day of the Triffids. 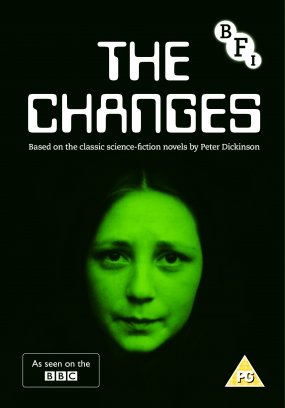 Well-remembered for its unsettling depiction of a society in meltdown, the 10-part series The Changes, first broadcast on BBC1 in early 1975 and is now available on DVD for the first time.

When a strange noise is emitted from machinery and electricity pylons, previously placid and easy-going folk turn violent against the technology that surrounds them, ruthlessly attacking radios, TVs and other domestic appliances. In the devastating aftermath, young Nicky Gore (Victoria Williams) is separated from her parents and finds a surrogate home with a group of Sikhs. But they soon are dubbed ‘The Devil’s Children’ by superstitious locals and Nicky is accused of sorcery by a witch-finder. In grave danger, she is forced to find a way to escape, find her parents and uncover what caused the world to become so unbalanced.

This highly acclaimed series was adapted from Peter Dickinson’s best-selling trilogy by Anna Home (who would later become chief executive of the Children’s Film and Television Foundation), and features music by the BBC Radiophonic Workshop’s Paddy Kingsland (The Hitchhiker’s Guide to the Galaxy).

The Changes paved the way for the likes of Survivors and Day of the Triffids, while its gritty depiction of a near-apocalyptic world, and its integration of Sikh characters, make it as progressive and fascinating now as it was when it was first broadcast.