British Transport Films Volume Seven: The Age of the Train

Showcasing a number of the British Transport Commission’s later films, this collection focuses on the ‘corporate blue’ of British Rail. 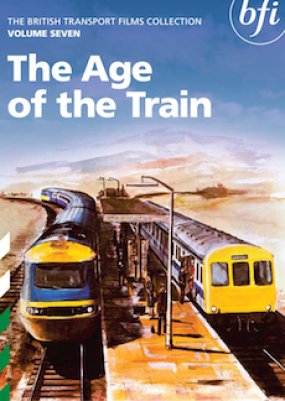 The Age of the Train, the seventh volume of British Transport Films digitally remastered and released in a double disc DVD set by the BFI – over four hours long – focuses on the later films made by the BTF unit. This, the ‘corporate blue’ era of British Rail, brought about some of the greatest advancements in rail travel that the world had ever seen.

Once 100mph running was standard, travelling inter-city was the new word in getting about and BR was determined to modernise further. Inter-City 125 is the story of the building of a new generation of high-speed trains. Two shorter films included on this release are Centenary Express; a gastronomic journey from Yorkshire to London on a special train made up of vintage restaurant cars to celebrate a hundred years of train catering, and Sir Peter Parker Talks to Jimmy Savile – two film inserts which would have been used as projected ‘participants’ in a live internal staff conference.

British Transport Films also produced staff information and public service films, and safety was a major theme of these during the unit’s latter years. Included here is The Finishing Line, a film to discourage young children from straying or playing on railway lines. The film was shockingly effective and as such was shown with strict controls. Also featured and with a similar theme is Robbie, aimed at eight to eleven year olds.

Other gems on Volume Seven include The Stone Carriers, thought to be BTF’s last production as a fully functioning unit, Discover Britain by Train which was aimed at American audiences and Old Sam the Signalman, a film made for schoolchildren in which old Sam reminisces over the railways and how they have changed.

Now preserved in the BFI National Archive, these films will fascinate not only transport enthusiasts but also fans of historical British documentary filmmaking.